Showing posts from July, 2013
Show all

July 26, 2013
So it's my first Saturday Spankings, and it's actually the first snippet I've ever posted. I figured since I'm a snippet virgin I'd start with something from my first book, in keeping with the theme of firsts. This is from Last Chance . Connie is over Nate's lap about to have her first punishment spanking after agreeing to incorporate domestic discipline in their relationship. As you can see, it turns out to be more than she expected: His hand fell with a sharp crack, connecting with her cool flesh and instantly heating up her left cheek. The burn quickly spread outward, lighting up her nerve endings. Before she could adjust to the sharp sting he landed another one on her right cheek. The blows rained down quickly, each smack in a slightly different place, so that in no time at all her entire ass was on fire, throbbing and hot. She couldn’t help but squirm and try to get away, thrashing her legs until Nate lifted his left leg and pinned her beneath him. Wi
20 comments
Read more

July 16, 2013
I was messing around on Twitter with my feet up after dinner today, when my husband sat down next to me. "Whatcha doing?" "Trying to interact with people on social media so I can build my brand." I'd just read an article saying I should do this, but I haven't figured out how I want to go about actually doing it. Social media is not my thing. I have a personal Facebook account that I haven't used in years. I'm not on LinkedIn. I've never looked at Pinterest. I really have no desire to share where I am, or what I'm doing, with everyone I know. I spend a decent amount of time on Fet but I don't actually post anything- I'm just there to read the articles, I swear! In sum, I'm fumbling my way through all this stuff, trying to decide what I want to say and when. And I was staring at the computer pensing on how to proceed when my husband plopped down at my side. "My shorts have a hole in them." I slid my eyes away
2 comments
Read more

Surprise Chance is on Amazon

July 14, 2013
My second book, Surprise Chance, is now available on Amazon. Click here to buy . I hope you enjoy and as always I'd love to hear your comments.
Post a Comment
Read more 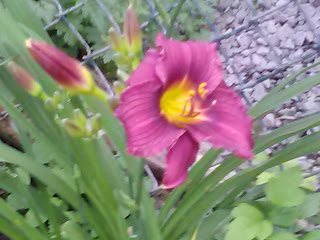 Flowers from my garden. Just cause they're pretty and I like them. They're cellphone pics so not that great but they make me smile.
Post a Comment
Read more

July 09, 2013
It's hot where I am. And muggy. And hot. I'm not a fan of being overly warm. I love a good sunny day by the water with a nice breeze blowing in, but this uncomfortable sticky soup, where you don't even want to move let alone be productive and get things done, is not something I'm fond of at all. Not that I imagine most people are, but what makes it worse is that I don't have air conditioning. There are two window units in my children's rooms but otherwise my house is not centrally cooled, which blows. There is no escape from the heat. What is the point of all this whining and complaining and bitching and moaning, other than the fact that it highlights why I need a new house? Well, I'm not writing. I'm not really doing much of anything, except when I'm going to concerts and picnics and all those things you do in the summer for the precious few months of vacation and nice weather we get in the north. But when I'm home, lately, I've been doi
Post a Comment
Read more

Surprise Chance is out!

July 07, 2013
My second book in the Chance series, Surprise Chance , is out now! Here's the description: Derek's been lusting after Gina for months, trying to get her to go out with him, and when that fails, fabricating guys nights at their mutual friend's house when she's studying with his buddy Nate's wife. But she turns him down every time, refusing to explain why. Then finally after Nate and Connie's wedding he gets his chance and makes a move, only to have her run out on him in the morning. Then she dodges him for a week, leaving Derek fed up yet wanting more. So he takes matters into his own hands, determined to show her that they'd be perfect together even if he has to do it over his knee. Gina knows Derek's interested in her, how could she not with him asking her for a date every time he sees her, but she knows they wouldn't be a good match. Sure he's good looking, smart, fun and an all around nice guy, but she has needs. Needs that only a certain ki
Post a Comment
Read more
More posts